>What If My Work is Boring?

Posted on April 7, 2010 by jeanevogelart 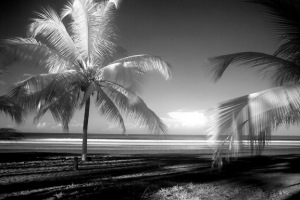 I had two fears heading to a recent trip to Costa Rica. One, was a fear of heights. I’ll write about that later.

The second was that the work I would do there would be boring.

I traveled as a chaperon on an 8th grade Spanish class trip. I wanted to travel with my daughter (nine days, no fighting, personal record), brush up my Spanish a bit and, of course, shoot. A photographer always shoots.

But there was a nagging worry: what if I came back with dull, lifeless work? I was on a tour and not in control of my schedule. I had to shoot when I could, not hold up the group, and still find time to be inspired and thoughtful. What if my work looked like everybody else’s – the same old shots of a Latin America country?

I had three goals:

1. Make some Infrared images, which are difficult under the best circumstances. Infrared requires a tripod, long exposures and often many, many shots to get it right. I didn’t have much time.

2. Capture images that would stand alone as fine art, and some that I could copy onto Polaroid film back in the studio.

I knew I could make the images, but how could I make them uniquely mine? I think every artist goes into new projects with deafening self-doubt. What if all that other work is a fluke? What if I have to be in my “safety zone” to make art? What if I’m a fraud?

These worries are the curse of the artist who tries to put meaning and soul into every piece. The artist who makes “pretty pictures” has not a care in the world. He already knows what he’s going to do. He’s done it thousands of times before.

Three days into the trip I knew what I wanted to capture. There’s a saying in Costa Rica that means “no worries.” You hear it everywhere. Pura vida. The bus is broken down. Pura vida. We’ll get it fixed. It’s raining. Pura vida. But’s not cold. The ice cream has melted. Pura vida. Now it’s like a shake.

Pura vida. Literally, it means “pure life.” That simple idea dismissed the fear of coming home with boring work. How could it be boring? I put my soul into it. Pura vida.

Art saves lives. That's my mantra and my motivation. My primary purpose as an artist is to inspire, entertain, make you smile, make you mad, make you think or recall a memory. I strive for work that is intimate and genuine, and sometimes whimsical. It's always more than a "pretty picture." I demand a relationship.
View all posts by jeanevogelart →
This entry was posted in Art, Infrared, NewWork, Polaroid. Bookmark the permalink.

2 Responses to >What If My Work is Boring?